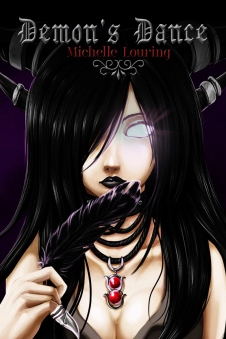 She had not heard a word about the woman’s suicide since the day it happened. It was like everyone was pretending nothing was wrong, going on with their lives without giving into the fear that could be seen in their eyes.
But nothing had happened in the last few days. If it had, the guards had somehow managed to hide it from the public, because everything seemed peaceful on the surface. But Selissa wasn’t blind.
She didn’t know how she hadn’t noticed the choking tension in the city. It was everywhere, like a thick blanket wrapping itself around every building and every living being within the walls. And no normal murderer would bring such unvoiced fear with him.
Selissa knew the cause of it. Even though she couldn’t sense it, the influence of dark magic could be seen everywhere once you noticed the signs. The townspeople didn’t know why they were afraid. Maybe they weren’t even aware of the terror that Selissa could see in their every move. That was why no one was saying anything. It wasn’t the bodies turning up in the streets, but the demon magic seeping into their subconciousness that made their eyes flicker nervously without their knowledge.
“How can one demon do this?” Selissa asked quietly one evening as she sat watching the rain from her windowsill.
Ardeth was lying on her bed, idly staring at the ceiling and for once letting her dwell on her thoughts. His mask was thrown on the nightstand beside him, exposing the demonic mark on his cheek. He looked up at her question.
“No one ever said she was alone about it.” He said casually. Selissa stiffened and turned to look at him with horror creeping onto her face, but he waved her off.
“Calm down.” He said and let his head fall back onto the bed. “Nothing points towards anyone else being involved.”
Ardeth dismissed the possibility that the town could be crawling with demons with the same careless ease he treated nearly everything else with, but Selissa still felt unnerved by the thought. It hadn’t even occured to her that the demoness they had seen in the street might not be the only one responsible for what was happening.
Ardeth must have sensed her unease, because his eyes returned to her tense form when she remained quiet.
“The more powerful demons rarely work together unless they gain something from it.” He said. “If she’s powerful enough to take a human form, she’s probably capable of casting the curses on her own.”
It wasn’t really the curses Selissa was worried about. She didn’t doubt the demoness’ ability to make people kill themselves, but to shroud a whole city in the haze of magic was a demonstration of pure power.
‘Come…’ Selissa started, surprised by the sound of the voice. She looked at Ardeth who raised an eyebrow at her startled expression.
“Did you hear that?” She asked.
“Hear what?” He sat up in the bed to watch her as she turned to look out the window.
“That voice…” Selissa said slowly. Maybe she had imagined it? “You didn’t hear it?”
“No…” Ardeth said dryly. “Aren’t you used to hearing voices?”
She knew what he was refering to, but she was only used to hearing one voice.
‘Come to me…’ It was barely a whisper.
“It isn’t him…” Selissa said, dread slowly coiling itself around her chest. This was not right.
‘Come out, come out…’ The voice whispered and Selissa stood up with a start. Without even sparing Ardeth a look, she crossed the room in two long steps and grabbed her sword sheaths from beside the bed. Dashing out the door, she was vaguely aware of the assassin calling out to her, but she didn’t care. She knew who the voice belonged to.

Demon’s Dance is available for:

Other formats at Smashwords